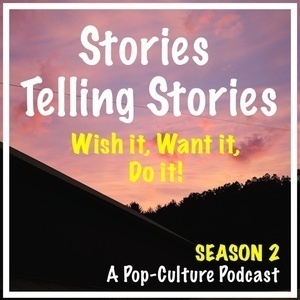 So today on STORIES TELLING STORIES, we peel back the fur, crack back the cranium and question curiously how this cunning canine became a cult classic of cartoon, uh… crap... I was on such an alliterative run there… Anyway, This is Brian Griffin’s best-selling self-help novel WISH IT, WANT IT, DO IT!... written and read by Eric R. Hill

“Faster than the speed of love...”

The Prius-driving, wife-lusting, martini-sipping, anthropomorphic son of a Biscuit from Fox’s Favorite Foul-Mouthed Family fancies himself a writer. Brian Griffin, voiced in the series by creator Seth MacFarlane, began as a voice of reason and sort-of moral conscience in the early seasons of the show. But as time progressed, he became the straight man to Stewie’s antics and got relegated to B-plots and was even written out of the show (as a fuck you to fans, because why else would you write out a character and replace him with such a shitty substitution? Actually… this is FOX we’re talking about… it makes perfect sense… so scratch that.)

In Season 9 Episode 6, “Brian Writes a Bestseller,” we get our setup for this STS episode: After the critical and commercial failure of his first novel “Faster than the Speed of Love,” Brian placed the blame for the book’s failure on society and their obsession with shallow self-help books, backed up by the fact that the current best-seller is a self-help book penned by Pauly Shore. On the back of a half-hearted dare from Stewie, Brian agrees to write his own shallow self-help book, which does indeed become a commercial success… but success for the wrong reason comes with its own set of consequences. But you’ll have to watch the episode for more on that...

Is Brian truly a boring blowhard who feigns intellectualism to feel superior to others? Is the old wise Brian from earlier seasons superior to the pompous asshole Brian of late? And why is everyone in Quahog fine with a dog dating and sleeping with human women?! This is WISH IT, WANT IT, DO IT, as read by Brian Griffin, on STORIES TELLING STORIES.