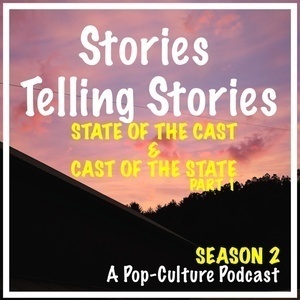 In this episode of STORIES TELLING STORIES, we look back on what we’ve accomplished so far with 1 and a half seasons of this wild, wacky, inflatable, arm-flailing, Danny DeVito Throw Momma From The Train Inspired pop culture podcast... We examine the delays that have plagued season 2… and, most importantly, the desire to break out of the self-imposed mold into which this show was born in this STATE OF THE CAST update, as well as introduce our new limited-sister series CAST OF THE STATE where we examine the history of, and cast members of MTV’s gone-but-not-forgotten early 90’s sketch comedy show THE STATE.

As I’ve mentioned in previous bits and pieces, here and there, over the past couple years, STS had its humble beginnings as a tribute of sorts to Danny DeVito’s directorial debut THROW MOMMA FROM THE TRAIN, and the stories being crafted in Professor Donner’s creative writing class. And while I’ve only tackled two of those stories to date (Mrs Hazeltine’s Submarine Story, and Murder at my Friend Harry’s) I plan on milking that film for all its worth before this podcast, as all do, comes to its inevitable end. I’ve explored stories within stories from The Simpsons, Family Guy, Back to the Future, The Marvel Cinematic Universe, and more, with several more scripts and mediums in the works right now.

So what’s the hold-up? Why am I doing this? Why the delay?

Let me start off by saying… telling other people’s stories is fun. But it’s also hard work. Not only do I have to find them, I have to write them to style, perform them to the best of my ability, edit it all together, and hope to whatever podcasting gods oversee this sort of work that it makes sense, is well-received, and that I don’t stray far enough from Fair Use to get sued.

And, frankly, I’m bored. I want to do more. I don’t want to JUST tell other people’s stories… like the story of MICHAEL IAN BLACK, who rose to prominence from his humble beginnings on MTV’s THE STATE.

MIB is arguably the most recognizable alum from THE STATE. His career highlights include his role in “Wet Hot American Summer”, a recurring presence on VH1’s “I Love The…” series that he feared he may never break away from, and a robust stand-up comedy career that keeps him busy. MTV spun off THE STATE, of sorts, with the show VIVA VARIETY from 97-99 that brought fellow STATE cast-members Thomas Lennon and Kerri Kenney together alongside MIB’s “Johnny Blue Jeans.” But as they went on to (arguably) lesser-known fame, BLACK’S dry, irreverent take on pop culture helped make in a “bit” of a household name. His writing credits include the co-penned Simon Pegg feature “Run, Fatboy, Run” and “Wedding Dayz.” He’s also written quite the collection of children’s books, much like Danny DeVito’s character OWEN in THROW MOMMA FROM THE TRAIN, voiced several characters on Seth Green’s ROBOT CHICKEN, and makes me wonder why of all the alum I could have focused on I had to start with the one with the longest and most impressive… resume…

Going forward, I plan on expanding the scope of the STS brand into more of an umbrella that covers a wider range of topics. I wouldn’t call it a “podcast network” so much as I’d like to grow into a collective of different shows and personalities with a pop-culture focus, that ultimately tells good stories, whatever they may be. I experimented with this shift with the Season 2 April Fool’s episode “STORIES TELLING BEDTIME STORIES / ASMR” which was an unabashed joke and a riot to write and record. It was also, statistically speaking, surprisingly well received by STS listeners around the globe as it spiked interest in the podcast by over 300% in the month of April; a level of growth that has persisted since then, with new listeners jumping onboard all the time from all around the country and all around the world.

I haven’t reached all 50 states yet, but THE STATE itself first appeared on MTV December 17, 1993 and ran for four seasons, spanning only 28 total episodes, the finale of which aired on July 1st, 1995. The show ran into issues in regards to possible syndication and home video release due to the use of licenced music in the show. The issue of which wasn’t a big deal for MTV to initially air, as they paid yearly royalties to music licencing companies (since they used to show music videos back in the day, oddly enough) but it makes for a much bigger headache when it comes to transferring the content to another medium. And a niche show like THE STATE didn’t have a big enough legacy or following to warrant the lawyer and legal headaches a syndicated or home video release would bring until July 14th, 2009, 14 years and 14 days after the show ended, MTV finally released the complete series on DVD, and in subsequent years, to streaming services. What a memorable day in television history!

Much like the assortment of memorable characters MIB played on THE STATE including Levon, of Barry and Levon, a suave pair of sexually ambiguous swingers alongside Thomas Lennon (of Reno 911 fame, but that’s another episode), as well as playing Captain Monterey Jack - a nonsense spewing motivational speaker that parodied anti-drug and alcohol spots that ran on MTV at the time. But the TAPE PEOPLE sketch, about people with tape on their faces, has the double-duty of being one of my personal favorites as well as bringing us back to our source material THROW MOMMA FROM THE TRAIN, which shows Billy Crystal’s “Professor Donner” taping up his own face in the opening shot of the film, as he copes with his writer’s block. “I am the phantom… of the novel!”

Not to allude to my own pop culture project of degrees of separation between Throw Momma from the Train and every other piece of cultural significance in the past 50 years or anything, but for some reason I keep coming back to it, even now as I attempt to expand upon and grow STS into something more than a creative reimagining of someone else’s intellectual property. I’ve always had an interest in music, as the STS Season 1 finale displays, with my musical episode of A PETER GRIFFIN CHRISTMAS and expanding into music discussion as it relates to pop culture is something I hope to do on as well. Envisioning more of an unscripted roundtable with guests, like a traditional podcast, is appealing to me, and something I think my listeners would enjoy. If you’d like to let me know what you think about my plans… my little scheme… to grow the brand, feel free to let me know over on facebook, shoot an e-mail to StoriesTellingStories@gmail.com or even throw me a dollar over at Patreon.com/StoriesTellingStories and let’s open up a discussion, like whether THE STATE deserves to languish in obscurity as time goes on, or if it truly stands alongside lesser-known sketch comedy peers like Round House, Kids in the Hall, or MadTV.

It’s a shame that THE STATE only lasted a paltry 28 episodes. But the fact that MICHAEL IAN BLACK has been able to cultivate such an impressive career from such humble beginnings, and the fact that we’re still talking about a short-lived show that went off the air nearly a quarter of a century ago speaks volumes to the fact that those involved delivered comedy and farce with a lightning-fast wit, absurd and ridiculous character archetypes that drew the line at expectation and shattered it with surrealist abandon, and wrapped it all up with an unconventional twist on stale tropes and a masterful subversion of pop-culture expectation. If you have enjoyed sketch comedy in ANY form in the last 50 years, or even Vaudeville if you’re counting, you owe it to yourself to go back and check out THE STATE, because even after 25 years it’s remarkably fresh and side-splittingly funny.

I’m really looking to engage some of you thousands of listeners out there. What would you like to see as season 2 progresses, and as we look towards 2020 and Seasons 3 and beyond? I’ve always had an interest in music, caffeinated products, video games, technology, and lots of stuff beyond what I’ve covered on this podcast to date. I’ve also thought about including more of the behind-the-scenes process of what goes into making this show happen, which I started with episode 206 by doing a livestream over on the patreon of my voiceover and editing session, which I plan to continue as a benefit if there’s any interest in it. And I’d like to bring in other writers for talks on the process of creation and hearing about their history and growth as a writer, Story Writers Telling Their Stories, perhaps. If I can line someone up, we’ll see what we can do to make it happen. I don’t want to turn this into yet another talking, rambling, podcast, but it would be fun to have an occasional dialogue going, and someone to simply shoot the shit with.

Music. Writing. “The Process.” Maybe even reading and reviewing user submissions. The sky truly is the limit as we examine how far we’ve come as a scrappy little podcast and look to where we can take it in the future. I, for one, am excited. We’re just getting started, friends. Let’s make the most of it!

STATE OF THE CAST & CAST OF THE STATE is produced in association with SEEING REDD PRODUCTIONS and STS MEDIA GROUP, recorded on-location at MILTHOUSE STUDIOS in Milton, Vermont, and podcasting around the globe to your frontal lobe wherever podcasts are found. Be sure to LIKE US on facebook, shoot us an e-mail if you have any questions, and if you really like the show consider supporting it on Patreon for as little as a dollar a month, where you’re free to catch a voiceover livestream, check out future episode ideas, and even pitch me your own. Because why not? I am EricTheReDD signing off and, as always, Stay Whimsical!