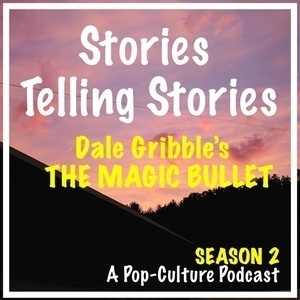 “You know what FORD stands for, don’t you? It means… Fix It Again, Tony, heh heh…”

What’s the first thing that comes to mind when you think of Texas? BBQ? Chili? The Kennedy Assassination? Oswald and the Grassy Knoll? Or is it Propane and Propane Accessories? In the sleepy town of Arlen there exists a man. He’s the man for this point in time. A man of dignity. A man of respect. A man of… oh wait… this story isn’t about Hank… Or Bill, or Boomhauer. This is… THE MAGIC BULLET from Mike Judge’s animated series “King of the Hill” on STORIES TELLING STORIES.

Dale Gribble… everyone’s favorite right-wing, conspiracy theory spewing, gun-toting, mountain dew drinking, exterminating, clone of his own future self from the year 2087 is many things… From running a small business, sort-of, to being President of the Gun Club, and chief firing agent in human resources for a stint, he’s worn a lot of hats outside of those provided by Certified Bounty Hunting and Manitoba Cigarettes… He aspired to inspire… children specifically, about the magic and mystery of guns. In Season 13 Episode 7, “Manger Baby Einstein” Dale takes a page from John Redcorn and LouAnne Platter, both of whom are cashing in on the early childhood education trends in their respective ways. Dale pens and “self-publishes” i.e. writes on lined paper and staples together, his master work… an illustrated, rhyming, and slightly musical book about a gun and her bullets i.e. her children… a work that he tries to share with his friends, but that Hank ultimately tells him is “kind of stupid.” What’s a downtrodden Gribble to do?

Would THE MAGIC BULLET have incurred a lawsuit from the infomercial product company of the same name? Would it sell in today’s cutthroat marketplace? And is Dale Gribble, i.e. Rusty Shackleford really the best person to teach kids about guns? All this and more as we dive into THE MAGIC BULLET, as read by Rusty Shackleford, on STORIES TELLING STORIES...