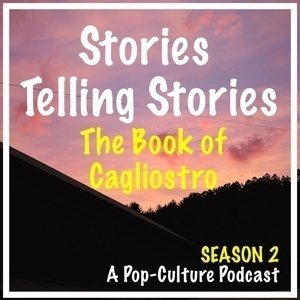 Today on STORIES TELLING STORIES, we go behind the cape and crack the knowledge protected by the master of the mystic arts… This is… The Book of Cagliostro, from Doctor Strange.

“This is time… endless, looped time!”

Created by Steve Ditko and Stan Lee, DOCTOR STRANGE made his first appearance in the July 1963 issue of STRANGE TALES (#110 if you’re counting). Doctor Strange serves as the Sorcerer Supreme, the primary protector of Earth against magical and mystical threats. Inspired by stories of black magic and Chandu the Magician, Strange was created during the Silver Age of Comic Books to bring a different kind of character and themes of mysticism to Marvel Comics. Once an egotistical surgeon. a car accident severely damages his hands and hinders his ability to perform surgery, he searches the globe for a way to repair them and encounters the Ancient One. After becoming one of the old Sorcerer Supreme's students, he becomes a practitioner of both the mystical arts as well as martial arts, along with studying many powerful spells. He has a suit consisting of two main relics, the Cloak of Levitation and the Eye of Agamotto, which give him added powers. He takes up residence in a mansion called the Sanctum Sanctorum, located in New York City, and later, Strange takes the title of Sorcerer Supreme to help to defend the world against future threats.

Doctor Strange is described as "the mightiest magician in the cosmos"[63] and "more powerful by far than any of your fellow humanoids" by Eternity, the sentience of the Marvel Universe. In 2008, Doctor Strange was ranked 83rd in Wizard's "200 Greatest Comic Book Characters of All Time" list,[2] and in 2012 was ranked 33rd in IGN's list of "The Top 50 Avengers".[3] He was also ranked 38th on IGN's list of "Top 100 Comic Book Heroes".

Could Strange really have defeated Thanos 1-on-1 if he used the Time Stone? Is his facial hair superior to Tony Stark’s? And is the Cloak of Levitation ALWAYS listening? This is THE BOOK OF CAGLIOSTRO from DOCTOR STRANGE, as read by Bowling Ball Pumpkin Patch, on STORIES TELLING STORIES...

Wong told on me?!