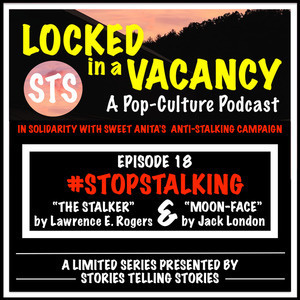 There’s an epidemic affecting content creators that seems to be coming to a head. This issue is not a modern one… but our increasingly interconnected world has seen it increase to millions more than ever before, spanning every platform, and across every conceivable medium. You may not have experienced it yourself, but I guarantee you know someone who has. It can start harmlessly enough… with an unsolicited DM… a quick compliment… a baited hook… And it can quickly devolve into anger… hurling slander… doxxing… death threats… additional messages and attempts at contact across multiple platforms. Showing up at a place of employment. Showing up at home. Knocking on the front door for hours. Sleeping in the back garden. Peeking through the windows. Leaving notes and gifts interspersed with professed gestures of love and explicit details about how they will take your life… your family members’ lives… kill your pets… and that there’s nothing you can do to stop it.

99% of online stalking cases that are taken to trial end in the defendant walking free, without being charged. They may be issued a restraining order, which they’ve received in the past and simply walk through. They will continue. And they will either force the creator off the web and into a life of solitude and PTSD, forever looking over their shoulder… even littered with the occasional note “I’m still coming for you,” or, like so many, force them to continue creating in order to support themselves, knowing their stalker is out there, watching and waiting…

If this sounds like a gross over exaggeration then you haven’t been paying attention. In the last week I have had several of the content creators I follow come forward, either publicly or behind community walls, with their own stories of stalking… from persistent and vulgar messaging, to attempts at doxxing, death threats, attempted assault and abduction, and more. This is a problem that predominantly affects female creators, but I know men who have also been victims of these tactics. Most are still creating but a few have been forced away.

The natural reaction is, unfortunately, to blame the victim. “Learn karate… buy a gun… get a dog… move house… get a different job.” Beyond the ridiculousness of those other “solutions” when is the last time you were being stalked at work by someone who was threatening your life and the only solution you were offered was to get a new job? A lot of the creators I’m talking about; streamers, YouTubers, musicians, etc… do this for work. This is their job. They are self employed content creators, making their living online, which these days is absolutely vital. When your work is creating content online, you can’t just walk down the street and “get a new job.”

I’m refusing to name names and I’m leaving information intentionally vague for privacy reasons, but some of the things I’ve been told are disturbing at best and horrifying at its worst. One name I will mention, because of the campaign she started, is “Sweet Anita.” For the unaware, Anita is a Twitch streamer who has been publicly dealing with a stalker that has committed nearly all of the above mentioned infractions against her, including making death threats towards her publically in her livestream chat, and being picked up and questioned by police a block and a half from her house, with the knife in his pocket that he told her he was going to kill her with… and who was released from their custody, then and there, a block and a half from her house without charge. She has detailed the account of her struggle against this stalker in a video on her YouTube channel and I highly encourage you to check it out, as it also includes stories from other creators who share their own stories of stalking and abuse from within their own communities.

A defining takeaway from all of their stories is the shockingly impartial response from police and even the FBI in dealing with their cases. They are met with apathy and indifference from those who are sworn to protect them. They don’t uphold restraining orders, they don’t take these threats against their lives seriously, and even in the rare instance they are arrested and charged only 1% go to jail for their actions or face any sort of significant repercussions.

People will continue to stalk and harass and threaten and KILL content creators at will because there are no repercussions... because until they sink in that blade or pull that trigger or swing that bat at the back of their head then nobody in law enforcement cares. Bianca Delvin was only 17 when she was brutally murdered by an individual who turned around and posted pictures of her decapitated head and dismembered body online for the world to see... Are you paying attention yet??

Perhaps this is a matter of mental health… but when it affects so many people it becomes a matter of public health. But what can I do? I care. I’m a good person. Easy… The next time you write a comment or send a DM stop and think for a second… you have a choice… you can perpetuate this culture that is leading to unspeakable acts of harassment and abuse, or you can not. To paraphrase a fellow creator, “99% of the comments I get are grand. They’re lovely things from nice people and that’s fine… but it’s that 1% that forced me to adopt a policy to never answer my DMs.” If what you’re trying to say in a DM you would be ashamed for your mother to read… or if you wouldn’t dare say it in a public comment section… then don’t say it. Don’t send it. You can appreciate the content and take great pleasure in what they create but a creator doesn’t owe you anything. Let me say that again… A.CONTENT.CREATOR.DOES.NOT.OWE.YOU.ANYTHING. So if it pains you to not say anything, then say something nice in the comment section and leave it at that. A simple “Hey, I love your content, here’s a picture of my dog!” can make a creator’s day. But leave it at that. They are not your friends. They will not date you. They won’t be your tour guide when you come to town. They are people, just like you, trying to make a living and live their life.

So let’s work together. Call out hate and abuse when you see it. Demand our platforms like YouTube and Twitch adopt stricter stalking and abuse policies. Advocate for verified accounts so law enforcement can better track down individuals who make threats against other people. And hold your local, state, and federal law enforcement agencies responsible for protecting the people they’ve sworn to protect. Just because someone makes their living producing YouTube videos or streaming on Twitch does not mean they don’t deserve our protection, our support, and our respect. Join the movement at #StopStalking and let’s bring this sort of behavior to an end. The 99% of us lovely humans far outweigh the 1% toxic minority… their aggression will not stand… not anymore…

And in case you think this is a new sort of behavior driven by the digital age… here is a second example of similar levels of senseless aggression in the form of a short story by influential American novelist Jack London… As our introductory story “The Stalker” by Lawrence E. Rogers, told a more contemporary tale of a man stalking a woman and nearly taking her life before ending up convicted and sent to prison (an unfortunately best-case circumstance) “Moon-Face” tells the story of a man with an abject hatred towards his neighbor, driven by nothing, but ending piece by piece as he single handedly dismantles the man’s life before seeing to it that he meets a brutal end… as well as his dog…