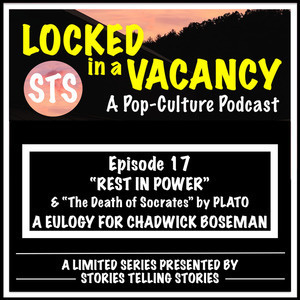 The tragic and sudden loss of Chadwick Boseman, after a secret four-year battle with colon cancer has shocked and saddened the world. This is my eulogy for a remarkable man, told in part with his own words, and in relation to Plato telling of The Death of Socrates.

Having been a fan of comic book stories for as long as I can remember, being alive for the rise and supremacy of Marvel at the box office has been an absolute dream. Seeing childhood heroes brought to life outside of cartoons, without the campy suits and low budgets of previous attempts is something I never thought I would see. These films crossed barriers and brought people together from all walks of life… young and old, geek and noob, men and women… it was a good time to be a comic book fan… until you looked around at the assembling avengers and realized that it was a whole lot of white people being the selfless, reckless, and sometimes careless heroes.

When Marvel announced that there would be a Black Panther movie, I was excited at everything that the series could bring to the MCU. Beyond introducing Wakanda and classic comic book storylines that could now be told, I was eager to see what the introduction would do for a global audience that so far has little in the way of representation in the universe. And I recall a great deal of backlash on social media… “oh, they’re just trying to be WOKE,” “Oh, there goes the MCU,” “This will probably be marvel’s “Cat Woman,” and other ridiculous and short-sighted statements seemingly set on sinking this script before it could be shot to celluloid. And coming off the heels of Phase 2 it was fair to be critical at this stage of the MCU, as a few stumbles had been had (Thor 2 and Iron Man 2 to name a few) but if they could get this right, it had the potential to be something special. But even my optimism couldn’t have foreseen a billion dollar blockbuster arising from the origin story of a lesser-known and controversial character so far removed from the existing formula. And the series was made better for it. The fanbase was made better for it. And an entire race of people was given a gift. I can’t personally relate to or understand some of the heritage and the tradition Black Panther displayed but I can certainly appreciate it and know that it’s incredibly important that black people of all ages are able to see something like this. It was not made for me. And I’m perfectly fine with that. I still thoroughly enjoyed it and think it was one of the best films of that phase in the MCU, thanks in no small part to the excellent casting choice of Chadwick Boseman as T’Challa.

Losing a hero is never easy… And I’ve lost several from my point of privilege as a mostly white man in America. I’m fortunate in that I’ve got countless icons in every medium in which to draw inspiration. But losing Chadwick Boseman to such a debilitating disease, one in which he struggled so privately yet continued to put out tremendous work, is unfathomable. Four years of a fight against Stage 3 colon cancer… all while filming and working and struggling in silence, with only a small circle of trusted people who knew the truth. A circle who deserve commendation in their own right for respecting his wishes and keeping to his wishes to not divulge his condition to anybody. He wanted to be strong for his community. He wanted little kids to have a hero in his work, to show them the true meaning of being a leader, and what you could grow up to be.

You weren’t just a King for comic book people… You were a King for YOUR people, for all people who have ever struggled to find a fair and powerful representation of themselves on screen. And before we dive into this week’s story, an account on the death of Socrates, written by Plato, as one last homage to a humble and brilliant man, I’d like to share a few of his own words, from a commencement speech he made at Howard University in 2018, to give hope and inspiration to the small but global audience that enjoys this podcast. This is for you Chadwick… Rest In Power… Wakanda Forever...

“Purpose crosses disciplines. Purpose is an essential element of you. It is the reason you are on the planet at this particular time in history. Your very existence is wrapped up in the things you are here to fulfill. Whatever you choose for a career path, remember, the struggles along the way are only meant to shape you for your purpose. When I dared to challenge the system that would relegate us to victims and stereotypes with no clear historical backgrounds, no hopes or talents, when I questioned that method of portrayal, a different path opened up for me, the path to my destiny. When God has something for you, it doesn't matter who stands against it. God will move someone that's holding you back away from the door and put someone there who will open it for you if it's meant for you. I don't know what your future is, but if you are willing to take the harder way, the more complicated one, the one with more failures at first than successes, the one that has ultimately proven to have more meaning, more victory, more glory then you will not regret it. Now, this is your time. The light of new realizations shines on you today” - Chadwick Boseman