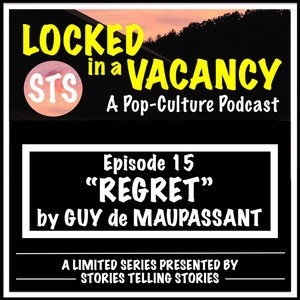 “I don’t have any regrets. If I were to die today, I would be content in the life I lived. I’m true to myself, true to my desires, and I’ve accomplished everything I’ve set my mind to. I’ve lived lavishly, loved deeply, embraced a life of honesty and truth, and have nothing but warmth and contentment in my heart. So if death wants to knock on my door tonight, I will go gladly on to the next great adventure!”

This is an exaggerated sentiment, but nonetheless one I see often, and one that I feel to be full of insecurity and hot air. To say one lives a life free of regret is to admit that one has been unable to learn the lessons that life has attempted to teach us. Regret, like so many tough life lessons, has become a four-letter word in self improvement, as if exposure to it renders one a failure. But what’s wrong with failure? If you never fell off a bike… never applied for that dream job, never pulled your heart from your sleeve and handed it to someone who looked at it in shock and disgust… how can you consider your life well-rounded? Well-lived?

My life is full of regrets. And I continue accumulating them with each passing day. As a soft-spoken homebody who feels out of place in crowds and gatherings, who experiences existential dread and social anxiety when forced to interact with strangers or friends-of-friends or even the futile attempt to navigate something as commonplace as online dating, I give up a lot to keep myself in a comfortable state. Some may even call this a valuable and lifesaving trait in the year of covid, 2020. Some may say I’m perfectly suited to this “new normal.” I can comfortably go days without leaving my house, and weeks with minimal interaction besides the occasional clerk or delivery driver.

But even before this “new normal,” going back as far as I can remember, I’ve been racking up regrets. Burning moments into memory where I said no, didn’t raise my hand, didn’t speak up… In 2001 I could have taken ten steps forward and shook hands with the singer of one of my favorite bands as he casually cut through a crowd, something so many others were doing… a singer I admired deeply and looked up to as I was just getting started in my rockstar stage… who I could’ve met, however briefly, but wouldn’t allow myself to do it. “It was nice to at least see him in person” I told myself, “You’ll get another chance…” Except he died suddenly of a previously undiagnosed heart condition just 21 days later.

This is a singular example… my social anxiety and introverted attitude cost me a golden opportunity and lead to another notch of regret, a big one, on the tally card of my life. Just another one of many… from promotions and perfect prospects to romantic opportunities, lost loves, and the one that got away.

Truth be told I’m perfect for this new normal because I’m naturally solitary and comfortable leading a life dominated by regrets. I am the outlier, not the norm. And I attempt to take adventures and attend concerts and check off bucket list items as I can to keep the big R in check, but truth be told I’m mostly living a one-sided life. I don’t learn from my regrets… I hoard them and obsess over them in excruciating detail, especially during those 3am hours when all I want to do is sleep. I may not have the success to show from taking a swing at a questionable fast ball, but my regrets reinforce my memory… meaning I never forget that I at least had the chance… An odd optimism, I know, but a great bit of mental gymnastics that manages to keep me sane. It’s not that I don’t want these things… to meet my heroes, to send witty icebreakers or even attempt an introduction of romantic intent, or to meet up with friends of friends and attempt to increase my tiny social circle… it’s that it’s not who I am. And the core of living a life without regret is to live a life of honesty to oneself. And in my most honest and true form, I’m a regret collector who is comfortable sitting on the sidelines and observing. My last great relationship blossomed at random with the help of a bottle of silver tequila, but in the socially-distanced and isolated age we live in, the likelihood of finding a fellow homebody who would rather sit at home and avoid people is either more likely now than ever before, or never going to happen in the time of swipes and paid apps. But the unknown in that keeps life exciting. You never know when or where it’s going to happen, or if it will even happen at all. Some may call that regretful, but I consider it hopeful.

At the end of the day, living a life adverse to regret is just as unhealthy as one where you tally them off over the decades. But somewhere in the middle we can survive. Regret is the topic that brings us to this week’s story… episode 15 of LOCKED IN A VACANCY, where we look at a short story about, and titled “REGRET” by legendary master of the short story GUY DE MAUPASSANT. GUY was a popular french author in the mid-to-late 19th century who was fortunate enough to find success and notoriety in his lifetime. He was prolific in his short years, crafting an impressive body of work that influenced other such notable authors as Anton Chekhov, Kate Chopin, and Henry James. His most notable English works are “The Necklace” which has become a piece of classroom reading around the world, and a short piece of Gothic Horror called “The Hand” that we may revisit closer to Halloween… But as brilliant and prolific as he was, he suffered from mental illness and was committed to an asylum in the last year of his life, after a failed suicide attempt… where he would ultimately die at the untimely age of 43. Whether he lived a life of regret or not we may not know, but peering at the world through his eyes, we can get a bit of a better idea…