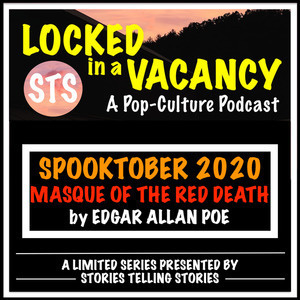 In 1842, transcendent author of romanticism and godfather of american horror Edgar Allen Poe released “The Masque of the Red Death,” a short story that follows prominent fictional character Prince Prospero and his lengthy attempts to avoid a dangerous plague, known as the Red Death, by hiding in his abbey. He, along with many other wealthy nobles, hosts a masquerade ball in seven rooms of the abbey, each decorated with a different color. In the midst of their revelry, a mysterious figure disguised as a Red Death victim enters and makes his way through each of the rooms.

The story has been a ripe source of interpretation and exploration in the years since it was published, with movies, tv shows, novels, and other stories based in little or large part on the elements that Poe presented in the original piece sharing their own vision for the mystic and disconnected world in which Prince Prospero resides.

At the date of publication for this episode, October 6th, 2020, the globe is still mired in the depths of the Covid-19 pandemic. The American President, Donald Trump, himself the world’s largest driver of coronavirus misinformation, as per a study released by Cornell University, has just walked out of the Walter Reed Medical Center where he was dosed with a mysterious cocktail of therapeutics after he and his wife tested positive for the virus just days before. Based on his cavalier attitude towards the virus, it’s no surprise he eventually contracted it. And in the coming days it has been revealed that an abundance of White House staff, security, and individuals who attended unmasked events have also come down with the virus.

Prince Prospero, in his auspicious castle, built walls and barriers to separate himself and his chosen elite from the common people, to party and drink and commune without fear. But the Red Death found an entrance… whether by deliberate sabotage or a false sense of security and undiagnosed infection from an asymptomatic individual we may never know… this invisible enemy… this great disease… pandemic… one that “should not be feared” and yet can seemingly be quelled or at least comforted by access to a team of doctors and experimental medication that no insurance company would dream of paying for… it’s so simple… it’s not a bad virus… I’m wincing in pain with each breath as I stand aside the White House doors but after only three days and a cocktail of steroids, narcotics, and antivirals... here I am! A hero! A beacon of hope for all who contract this condition. One that should not be feared - - nay, I dare say I am BETTER now for having had it… stronger… faster… 20 years younger… and better able to lead and to serve with my first-hand knowledge of the true effects of this disease…

The Prince retreats to his castle… with all the pomp and circumstance of a high school prom… all but certain of himself and his decision. Except now the Prince himself wears the Mask of the Red Death, bellowing clouds of death and disease from his damaged lungs with each uncovered breath… sending his microscopic minions home with all who work inside the walls of his hallowed castle…

Now I am become death… destroyer of worlds…