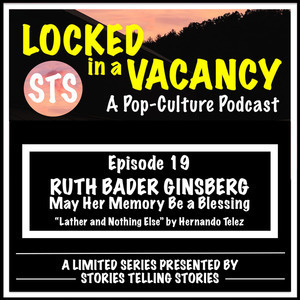 Supreme Court Justice Ruth Bader Ginsberg has died. She was a trailblazer. An icon. A hero and an inspiration to generations of young women. Through sheer will, tenacity, and some may say an abject bitter hatred that affixed her soul to her aging bones, she fought through multiple cancers, chemotherapy, and surgeries that would bring most people to their knees and yet she persisted. Call her a hard-ass. Call her a bitter old bitch, I’ve seen it all. The tenacity of this woman, strong in her convictions and compassionate in her dissension, is unparalleled in the history of the United States Supreme Court. There is nothing I can say that hasn’t already been said… So for that I will say simply this… let her words be a beacon of hope for the hopeless, a rallying cry for the oppressed, and a thorn in the side of all who would work to roll back the rights she spent a lifetime advancing.

For my global audience members, you may not understand the significance of the United States Supreme Court… unlike any other elected office, a Supreme Court justice is not bound by term limits and election cycles. Outside of confirmation in the United States senate, once a justice is seated, their position is held for life… pending death, retirement, or impeachment. The constitution states that justices shall hold their offices during good behavior and historically only one justice has ever been impeached; Samuel Chase in 1905. And the right to fill a vacant supreme court position falls to the president, to make a nomination to the senate, who then have to confirm (or vote on) said nominee. This has turned what was traditionally a bi-partisan affair into a hyper-partisan circus in recent memory to “skew the court” in favor of the left or the right. You would think at their core a Justice would be an individual who is beholden to no party and is independent of partisan politics, like a referee at a sports game. But playing politics more like a game of strategy has led to Presidents digging deep into party roots to nominate justices for lifetime positions that best suit their parties best interest.

And some may say Justice Ruth Bader Ginsberg was just as much a pawn of President Bill Clinton in that regard… a liberal choice by a relatively liberal president who would see to it that the policies of the left were kept in place. Just as recent nominees to the court have been hyperconservative choices meant to skew the court to the right in the hope of striking down or at least rolling back the effects of the American Care Act, Roe v. Wade, Voting Rights Act, and the Civil Rights Act.

Within the checks and balances of American Democracy, no one branch is meant to hold any more power than another branch. For example, both houses of congress can pass a bill that they wish to become a law. The President has the power of VETO which allows him to reject the bill, preventing it from becoming law and returning the bill to Congress. Congress can then choose to vote on it again, and if it passes with a ⅔ majority, then the bill automatically becomes a law and overrides the VETO. And if we have an existing law, it can be challenged in court as being unjust or unconstitutional. That lawsuit can make its way as far as The Supreme Court, who have the power to strike down a law for being unconstitutional, essentially acting as a check against the President and Congress. And finally, Congress has the power to modify the Constitution itself through amendments which can then act as a check against the supreme court, whose responsibility is to determine if a law is in violation of the constitution.

This may seem confusing, but a circle of three that keeps itself in check is something that exists across pop culture as well, like the triforce from The Legend of Zelda, and the three ancients from Eternal Darkness. It’s not quite the same thing, but you get the idea…

And that brings us back to the significance of the passing of Ruth Bader Ginsberg. If the current administration works at unprecedented speed to push a new nominee through congress before the election (or even before inauguration day) it will lead to a conservative super-majority in the court that, given the ages of the current justices, will stand for a generation. This means that cases in regards to a woman’s right to choose, election interference by foreign bodies, challenges to the Affordable Care Act, and many more that have been at risk for years will be placed upon the chopping block. Women seeking abortions for any reason will once again be forced into the shadows… to back-alley clinics, with physicians who perform them once again subject to arrest and imprisonment… the tenets of the Affordable Care Act that opened up health care access to millions of Americans will be stripped away, leading to millions more uninsured Americans that will clog emergency services and cause an unimaginable burden on health and human services in the time of covid… congressional gerrymandering will continue to expand unencumbered… the fundamental right to vote and access to polling stations will be limited or even restricted to certain classes of Americans, based on anything from immigration status or race, sex, or color. The amendment mandating term limits for President will be overwritten, setting the stage for a “president for life” like those so admired in China and North Korea by our current commander in chief. And if this all seems far-fetched and unlikely, the wheels are already in motion… committees are already in place… a third term commission is already hard at work… These are real, casual facts and we know this because they told us exactly what they want to do.

The November election may be the last of its kind in American politics. Or the first of its kind, depending on how you look at it. Do we allow the despots to operate in plain sight and return America to a great state of cold war fervor, of housewives, Jim Crowe and back-alley abortions? Or do we stand upon the shoulders of fallen heroes like Justice Ruth Bader Ginsberg who fought tooth and nail, until her dying day, to preserve the American ideal from tyranny? Do you want blood on your hands, or just shaving soap?

This is “Lather and Nothing Else” by Hernando Telez… on LOCKED IN A VACANCY… dedicated to the fierce, immortal spirit of Ruth Bader Ginsber… may her memory be a blessing.