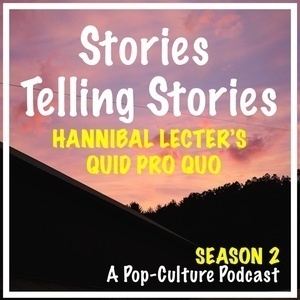 Today on STORIES TELLING STORIES we serve up some liver, alongside some fava beans and a nice chianti as we take a bite out of Hannibal Lecter’s “Quid Pro Quo” to Detective Clarice Starling in “SILENCE OF THE LAMBS”... Part 3 of our 4-Part October Spook-Tacular, where we examine a collection of strong female characters from across horror and fear in pop culture.

There aren’t many films I was barred from watching when I was young… my father was fairly liberal in what he allowed us kids to watch (more like would watch while we were in viewing distance, but we’re not splitting hairs here…), but “SILENCE OF THE LAMBS” was one that my mom would not allow us kids to watch. And so, at least for me, it developed its own special ethos… a cloak of darkness around this fabled film that was so horrific, so jarring, and so terrifying that young minds would be lost in a sea of recurring nightmares for merely being exposed to it. I knew of IT, Freddie Cruger, and countless other classic figures of horror, but it took until I was an adult in college to finally experience what made Hannibal Lecter so terrifying.

For the unaware, SILENCE OF THE LAMBS tells the story of the FBI’s search for a serial killer named Buffalo Bill. An agent-in-training, CLARICE STARLING is assigned to the case and, as part of her investigation, learns that one HANNIBAL “THE CANNIBAL” LECTER may have information that could lead to the capture of Buffalo Bill. Lecter is a man of science with a brilliant mind and is cunning beyond compare. Through a series of games and deals he gleans the information he needs from law enforcement to secure his own escape from the asylum, while at the same time giving them just enough bread crumbs to keep them distracted. Without giving too much away, Lecter promises Starling the information she seeks only through a quid pro quo agreement, that she tell him what he wants to know about her childhood. One of these requests has to do with little Clarice and a baby lamb… The silence of which… is deafening…

“I am in trouble here, this woman is not right!”

Is Hannibal Lecter proof that there exists a fine line between brilliance and insanity? Does Clarice outsmart him or does he let her believe she does? And a human liver should be the LAST part of a person you would want to eat… this is Lecter’s Quid Pro Quo, from SILENCE OF THE LAMBS, as read by Jody Foster and Sir Anthony Hopkins, on Stories Telling Stories!