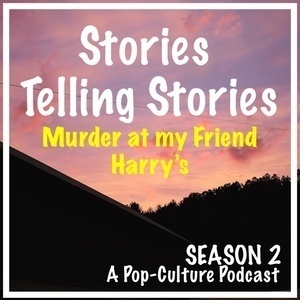 In the SEASON 2 PREMIERE of STORIES TELLING STORIES, we take a look at another story gleaned from the driving inspiration behind this podcast, with “Murder at my Friend Harry’s” from the seminal 80’s dark comedy THROW MOMMA FROM THE TRAIN…

As discussed in the very first episode of STORIES TELLING STORIES, TMFTT was the directorial debut of one Danny DeVito and featured a star-studded cast that included the likes of Billy Crystal, Rob Reiner, Oprah Winfrey, and the late Anne Ramsey, whose only other notable cinematic performance is burned into the collective psyche as Mother Fratelli in The Goonies, before her tragic passing in 1988. But TMFTT, while lesser-known than The Goonies, garnered her an Academy Award Nomination for Best Actress, an award she would lose to Olympia Dukakis in MOONSTRUCK. But that’s not why we’re here… While also directing the film, Danny DeVito stars as struggling creative writer, and ridiculous man-child Owen Lift, stuck under the thumb of his aging and overbearing momma. Desperate to find his voice and become a famous writer, he takes a class with Billy Crystal’s Professor Donner at the local community college, where he attempts to write murder mysteries without any sense of what a good murder mystery entails… what he produces is a three-page story with only two characters, one of which was dead on page 2. Aside from the opening line, and a brief scene underneath the bed-sheets following a conversation with Professor Donner, we’re not entirely sure what else the story contained… until now.

Does Professor Donner lash out at Owen due to his own insecurities as a writer? Was Owen’s father Ned a poet with a pen, explaining why Momma is so against his writing? And in 2018 do I really have the courage to tackle Mr Pinsky’s coffee table book in a future episode? This is… MURDER AT MY FRIEND HARRY’S, from THROW MOMMA FROM THE TRAIN… as read by Billy Crystal, on STORIES TELLING STORIES.

“The man in the hat staggered into the dark night, like a milkman going out on his route...”