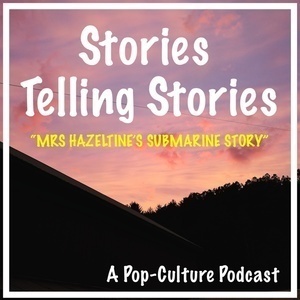 In today’s episode of STORIES TELLING STORIES, we take a look at Mrs. Hazeltine’s submarine story from the oft-ommitted 80’s classic “THROW MOMMA FROM THE TRAIN.”

“...dive, DIVE said the captain through the thing…”

The 1987 black comedy “TMFTT” is notable for being Danny DeVito’s directoral debut, as well as the only other film to star late-actress Anne Ramsey (of GOONIES fame) in the title role as DeVito’s cranky and cruel mother “Mrs. Lift.” OWEN LIFT is a man-child of sorts who was never allowed the chance to grow up and escape the grasp of his overbearing mother. Finding an outlet in a community college class, taught by Billy Crystal’s PROFESSOR DONNER, we discover a colorful cast of characters all vying for the opportunity to become better storytellers. Within this class, we discover an opinionated older woman, known only as MRS HAZELTINE who crafts a wartime submarine story without such key details as the name of certain instruments or the captain’s name; just a fellow seaman named DAVE, the use of questionable similes, and a seemingly abrupt and anticlimactic ending.

Where did these seamen come from? From what enemy do they make such a daring escape? And who the hell is DAVE? It’s time to find out, as MRS HAZELTINE’S Submarine Story comes to life, 30 years after the original, with the world’s first fully fleshed-out telling… Sit back, relax, and enjoy… This is STORIES TELLING STORIES…

“HOLY $#!^! WHAT A DREAM I WAS HAVING! Louis Armstrong was trying to kill me!”