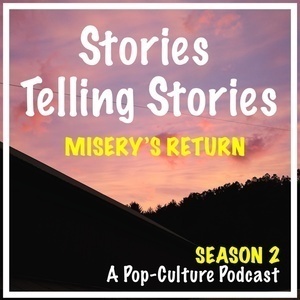 Today on STORIES TELLING STORIES we peel back the binding and breath in the intoxicating must of a vintage hard cover as we examine the story within the story in Stephen King’s MISERY… MISERY’S RETURN, in Part 2 of our 4-Part October Spook-Tacular, where we examine a collection of strong female characters from across horror and fear in pop culture.

I have a bit of a soft spot for MISERY. It was the first Stephen King book that little seventh-grade Eric picked up on his own to read. Having never seen the movie and knowing little of the story beyond what had been referenced in other media, I had no idea what to expect. And it haunted me… truly… for weeks after I read it. I saw Annie Wilkes in the darkness when I turned off the light; hobbling for safety on my own bloody stump… but I’m getting ahead of myself…

MISERY tells the story of struggling author PAUL SHELDON, who finds himself in the care of one ANNIE WILKES after his car careens off the road during a snowstorm. As the days progress, he finds himself exclusively under her version of “care” with no guests, no doctors, and a fandom that crosses from admiration to obsession as she, upset with his treatment of his own characters in the books, forces him under the threat of extreme violence to rewrite the story to appease her… a threat that she indeed makes true on. But you’ll have to read the book to find out how… Or see the movie... Portrayed in the 1990 film by Kathy Bates, in one of her most remarkable and powerful roles, Wilkes is strong, but fragile, headstrong but humble, and capable of incredible amounts of love… at any expense… The film is a fairly faithful recreation of King’s novel but does stray in some key departments, notably in the areas of Sheldon’s growing drug addiction and the lengths Wilkes goes to to keep him immobilized and unable to escape his prison.

“I am in trouble here, this woman is not right!”

Had he not made a daring escape, would Annie have ever let Paul go? Is he as much of a dirty birdy as Annie makes him out to be? And licking another person’s blood from your own hands.. Really?!? This is MISERY’S RETURN from Stephen King’s MISERY, as read by Kathy Bates and James Caan, on Stories Telling Stories!