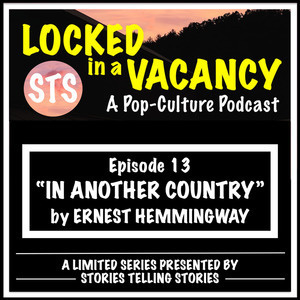 “In Another Country” was published in 1927 as part of the “Men Without Women” collection of short stories by 20th century icon Ernest Hemmingway.” The story is told through the eyes of an unnamed member of the Ambulance corps in Milan, Italy following World War 1, presumed to be from the perspective of Nick Adams, a character that Hemmingway created to see the world through his own eyes. The story is short, but concise, and speaks of a myriad of issues of the time, some which have transcended time and are surprisingly relevant today… most notably a hesitation and revulsion to medical technology and the promise of science to improve health and make lives better.

As we continue to face down this global epidemic, with the United States surpassing the single greatest number of positive cases than it’s had since the epidemic began months ago, we’re falling further and further behind the rest of the world. And yet they still staunchly refuse to wear masks in public, demand person-to-person service in restaurants and shops, congregate in large numbers in pools, pubs, and places of interest, and continue to endanger the lives of millions because of a basic lack of empathy for anyone that isn’t them or their families. It’s disgusting, it’s selfish, it’s wrong, and they should be fucking ashamed of themselves. “Oh, it’s hard, it makes me uncomfortable, why should I have to blah blah blah” enough. As flag-waving and chest pounding and American as you clamor to be, you still live in a society, and as such sometimes have to think of the greater good, like our parents, grandparents, and great-grandparents who fought The Great Wars, like the one Hemmingway writes about. If you think being forced to wear a mask so you can demand service at Applebees is a violation of your rights and causing undue hardship, you need to check yourself. Go fight a real war. No child is going to want to hear your stories about how you owned libs during the pandemic of 2020 by refusing to wear a mask and purposefully coughing on people who confronted you in the Piggly Wiggly.

That is my soapbox statement for this week. My mother, my father, my older sister, my grandparents, and countless other people in my life are immunocompromised in some way and would not survive this virus if they caught it. I am isolated and allowed to work from home until October thanks to my company caring enough to keep my family safe.

It seems to be getting worse out there… at least here in America… so do what you can to stay safe and stay healthy… In other countries, things are different… let’s join our brothers and sisters in the rest of the world and do the right thing… this is… “In Another Country” by Ernest Hemmingway, on LOCKED IN A VACANCY...