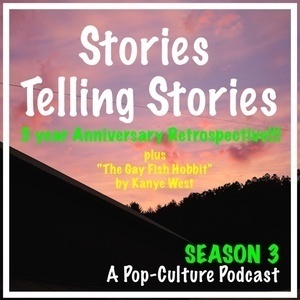 Today is August 8th, 2020. And three years ago today I took the monumental first step of launching this podcast. I had little experience in the medium, besides appearing on an episode of “THE NIHILIST PODCAST NETWORK” but as a writer, storyteller, and performer I felt like it could be a good medium to keep me focused in my theatrical off-season. Little did I know it would carry me through ups, downs, nearly giving up, and finding a bit of a niche and a slice of success with the quarantine miniseries LOCKED IN A VACANCY that chronicles stories of loneliness, isolation, and solitude.

But STS started, as I’ve stated a dozen times before, as an homage to Danny DeVito’s directorial debut… the black comedy “THROW MOMMA FROM THE TRAIN” and the ragtag band of misfit authors in Professor Donnor’s creative writing class. Mrs Hazeltine’s Submarine Story is one that my mother and I still joke and quote on the regular, as reminiscent of the writing styles and personality of my maternal grandmother, and being the sort of person any amateur writer can relate to encountering in an academic setting.

I set my intentions for the series as being a sounding board and finishing school, of sorts, to all sorts of unfinished stories that exist throughout pop culture. Books on a shelf, plot pieces, author’s struggling for inspiration, and self-help infomercial sets within a pre-established universe are all ripe for the picking. And over the course of two and a half seasons my backlog of potential episodes continues to grow and as of today I can’t see an end in sight for this “storied” series that, in my humble opinion, three years in, is just getting started.

Season 3 has been extraordinarily transformative for the podcast… with the launch of a long-standing miniseries beyond our one-off ASMR episodes, that are joke releases when I need a bit of a break. LOCKED IN A VACANCY has brought Patreon supporters to the series for the first time in the history of the series. It has seen episodes lengths increase significantly, from the typical 10-12mins of an STS installment to nearly an hour for some longer VACANCY stories. And it has allowed me to explore work from new and classic authors I would have otherwise not taken the time to read. I’d be hard-pressed to say it’s “educational” in that regard, but anything that can give the listener an interest in literature is a good thing in my book.

Looking ahead to the latter half of Season 3, and into Season 4, I’ve got a few new ideas in the pipeline. I’ve kicked around the ideas of a few additional miniseries, tackling various topics and ideas, the first of which I hope to debut in the coming weeks, dubbed “A WRITER WRITES,” where I get the chance to sit down with budding authors in a setting much like Professor Donnor’s Creative Writing course, to discuss their work, talk about writing as a whole, and share some of what they’re working on on a global stage. If you’re an upstart author and would like to sit down and discuss your craft with me, send an e-mail to StoriesTellingStories@Gmail.com and we’ll see about getting you on the show!

I’ve also had requests by one of my loyal patrons to explore more of my original work… not just the ghostwriting I’ve done on this podcast to bolster the work of others… As you may or may not be aware, In addition to podcasting I’m a playwright-in-residence for a Vermont-based theater company and have the honor of producing multiple original shows each year. I’ve had work that’s run the gamut, from Kennedy Center Adjudication to one-act plays that nobody has ever read. And the thought of sharing this work, as odd as it sounds, is terrifying to me. But the thrill is also exhilarating as the whole point of penning these profound plays is to present my perspective to a perceptive and perspicacious population. Whew… that’s two bachelor’s degrees worth of alliteration for you… and as much as I’m not one to “toot my own horn” there is great catharsis to be found in letting your art out into the world to speak for itself. And whether the response is good, bad, or miscellaneous, what is the point of creating and being a creator if you keep all your content under wraps? So pending the selection of a flashy and inviting name, expect a wholly-original miniseries on the horizon as well…

Lastly, from the very first episode that I released three years ago today, I wanted to build up this series as a launchpad to collaborate with others across all sorts of media… from other podcasts, writers, actors, you name it. But collaboration has been hard to come by, partially due to my difficulty in delegating tasks and feeling the need to do everything myself and the fact that I very much am a shy and quiet person who is much more comfortable being alone with my work than trying to cold-call creators for collaboration content. But I’m working on it. And expect to hear some new-to-the-show voices on both STS and Locked in a Vacancy episodes in the very near future.

So here we are… three years into this quirky little podcast that I started on a whim. It’s whacky, it’s wonderful, and it’s weird… But to coin a phrase from one of my favorite creators… “Weird is Good!” So that’s what we will continue to strive to be. And thanks to technology, we can strive to be whatever it is in the world we want be… just like a furry little hobbit can become as rich and beautiful and revered as Beyonce through the magic power of photoshop… This is… “The Gay Fish Hobbit” as read by Kanye West, on STORIES TELLING STORIES…