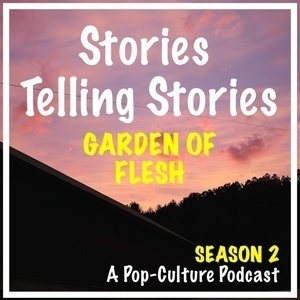 The leaves are changing… the days are getting colder and the nights are getting longer… autumn is in the air. It’s October, and Halloween is just around the corner; a time for sweet treats, tricks and treats, and scary stories to keep you up at night… Here at STS, we’re no strangers to the power of a good scary story, so we’re setting up a Halloween Spook-Tacular October, with four tales of terror sure to make your spine tingle… first up, we take a midnight ride to the middle of Summit Lake, to examine an underwater offering from my favorite early-2000’s made-for-TV movie, and examine Judd Nelson’s haunting portrayal of B-Movie script writer Stanley Caldwell. This is... GARDEN OF FLESH, from USA Network’s CABIN BY THE LAKE, on STORIES TELLING STORIES...

"I’m not here and I can’t afford voicemail, I’m just the writer… what do you want?”

In the year 2000, I was a huge fan of professional wrestling, specifically the then-WWF which aired Monday Night Raw on the USA Network. I didn’t otherwise pay much attention to the network, only tuning in for wrestling programming. But in the weeks leading up to the February 1st release of CABIN BY THE LAKE my interest was piqued during commercial breaks between matches, teasing a Judd Nelson-led suspense thriller that was sure to relaunch the career of the Breakfast Club alum. After a quick trip to the local Ames Department store, in my grandmother’s trusty Ford Taurus, I had a blank VHS cassette at the ready and settled in to record this no-doubt Oscar worthy made-for-tv performance, after the night’s wrestling had concluded. I don’t remember what happened on that episode of RAW, but I remember Cabin by the Lake…

Stanley is a screenwriter struggling with writer’s block. He’s at his mountain lake cabin trying to finish the script for a film that has already been sold into production. His agent and the film’s director are hounding him for a script that mocks him with blank pages. We experience the silence of Stanley’s life… a quiet home, silence, a squeaking office chair… minimal distraction. And minimal work. But much like a classically-trained thespian, there is a method in place… Stanley remarks to his agent, “okay, I’ll drown the girl,” in exasperation to her hounding about his failure to deliver the script on time, as the film is already going into production. And where she heard a writer writing, Stanley hears a call to action, beyond his desire to glean bits of character and motivation by holding an actual girl hostage… He enters… through a secret door, to a secret room, visible through a two-way mirror, we find a girl, Kimberly, chained to the floor… Stanley enters with a plate of food and a bottle of water, setting them in the center of the room… we see graffiti on the walls from a furnished permanent marker, a bare mattress against the far wall, a sink and a toilet… prison, in such a pristine environment. He gives her clean clothes and gags her with an orange for a trip out on the boat, where he ties her to a brick and pushes her overboard, after surmising from a few key questions that she was too frightened to speak. He pulls her up by the hair, for one last gasp of air, advising her “Don’t hold your breath… it just makes it worse…” before letting her go, sinking into the quiet night as her voice is silenced forever. Will she complete his garden?

I adore this movie. It’s low-budget, it’s corny as hell, but Nelson’s intense stare and intimidating presence dominate every scene he’s in. The rest of the actors, try as they might, can’t manage to escape the shadow that he casts. But outside the Brat Pack, Judd Nelson was never able to achieve the level of success and steady work as some of his peers, which is unfortunate. His intensity is off-the-charts and when given a layered character he can go to town on the subtle nuances that truly bring them to life. The mistake Hollywood made with Judd Nelson was trying to make him a leading man… and perhaps he longed for the roles taken by an Estevez or a Lowe, but few actors worth their salt can imbibe a deranged, intense, gentle, friendly, and brutal mindset into a single character, with convincing integrity like he can. Nelson’s got chops… he ain’t just John Bender, kids.

“You gave me blank pages!!”

How many other scripts like this has Stanley written? Where did he first get the idea to kidnap girls as character research? And why the hell did “Return to Cabin By The Lake” have to suck so badly compared to the original?!? This is GARDEN OF FLESH from the made-for-USA Networks TV Movie “CABIN BY THE LAKE,” as read by Judd Nelson, on Stories Telling Stories!