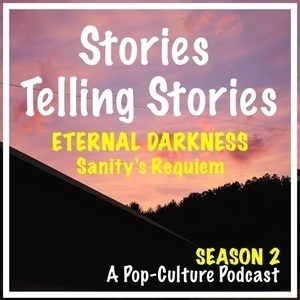 When things go bump in the night… when statues and paintings have wandering eyes… when our sanity drops to dangerously low levels, how can we know what’s real, and what isn’t really happening? Set the clock to 3:33 and enter the secret room… sit down at the ancient desk and peer inside the tightly-bound pages as we examine one of the strongest women in video game terror, Alexandra Roivas, in part 4 and our epic conclusion to the 2019 STS Halloween Spooktacular. This is… The Tome of the Eternal Darkness… on STORIES TELLING STORIES.

“Flesh… bone… bound together with the oddest magikal incantations...”

Lara Croft… Jill Valentine… Samus Aran… The list is small but mighty when one ponders the strongest women in video game history. Some explore, some survive, others kick ass and take names. But one game often missing from the list is Alexandra Roivas, hailing from the Nintendo Gamecube cult classic ETERNAL DARKNESS, SANITY’S REQUIEM. Produced by Silicon Knights and originally designed for release on the Nintendo 64, ETERNAL DARKNESS ultimately found a home on the Gamecube and crafted a niche for itself as a “psychological horror” game, at a time when survival horror franchises like RESIDENT EVIL and SILENT HILL were the king of fear. ETERNAL DARKNESS took a different approach by including a “sanity meter” in the game, which was affected by the presence of enemies, hallucinations, and contact with the Tome and the stories it contained, and creatively turned the player’s own mind against them in freakishly creative ways. The lower your sanity dropped, the further your character suffered… from simple effects like bleeding walls and whispering voices, to more intense and infuriating things like a false ending or the game appearing to erase your memory card, one that I fell for and layed undue blame upon my little sister who was exploring on my save file… a mistake I didn’t realize I had even made until 6 weeks later when I fired up the game again... Dubbed “Sanity Effects” these elements became the highlight of the game and the reason I played through it dozens of times. The narrative centers around the Roivas family, with Alexandra Roivas acting as the central character that connects all the subplots and pulls the player into the story. Traversing two millennia we meet a host of playable characters, from distant relatives to byzantine monks and even a Canadian firefighter. The game has you align yourself with one of the three “Guardians” which are interdimensional Gods who overpower and succumb to each other’s powers in a power triad, meaning no one Guardian can rise above the other two; an interesting take on checks and balances. And the game plays out differently depending on which Guardian you align yourself with, meaning replay value is very high, and in a lot of ways is never the same game twice...

“May the rats eat your eyes!!! The darkness is coming!”

Whose flesh and bone is the TOME bound with anyway? Does it smells more like beef jerky or a phone book? And why the hell does Alex not know her way around her grandfather’s house as a fully-grown adult?! Let’s find out as we crack the cover and dive head-first into Roivas Family history and the TOME of the Eternal Darkness, on STORIES TELLING STORIES...