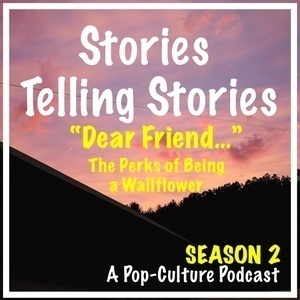 “You see things And you understand… you’re a wallflower.”

We’ve all been there… high school… day 1… the challenge to fit in, to make friends, the struggle to find ourselves in the manic energy of a new building, surrounded by a sea of foreign faces. It’s all too familiar and all too real, a time in our life most of us would rather forget. But most of us don’t have the cloud of childhood trauma hanging over our heads… This is… Charlie’s “Dear Friend” letters, from novel-turned-indie film “Perks of Being a Wallflower” on STORIES TELLING STORIES.

“Welcome to the island of misfit toys.”

I love coming-of-age stories. Novels, films, television, the whole lot. I struggled a lot in my adolescence, coming to terms with getting older and the inevitable changes that begin affecting us on a much deeper level. Charlie is that version of all of us, played brilliantly by Logan Lerman in the 2012 film, that struggled to find his place in the big picture, when everything around him made him feel small. Charlie reached out to fellow shop class peer, a senior named Patrick, at a football game, and was then introduced to Patrick’s step-sister Sam, with whom he proceeded to fall deeply and immediately in love. Charlie was absorbed this group of misfit seniors who saw pieces of themselves in this shy, awkward freshman and their relationships grew and deepened as the year progressed, but also came crashing down in an instant of regrettable teenage impulsiveness. Throughout all of this, Charlie writes letters to an unnamed individual, known only as “Dear Friend,” explaining his trials and tribulations as he navigates the shark-infested waters of love, life, and mental illness as a high school adolescent.

“We accept the love we think we deserve...”

Would a Sam and Charlie relationship really last once she was off to college for good? Is the “friend” a fellow peer or a distant stranger with zero emotional involvement? And is Charlie’s sister Candace the unsung hero of this whole story? Let’s find out, as we examine Charlie’s letters from “The Perks of Being A Wallflower” on STORIES TELLING STORIES...