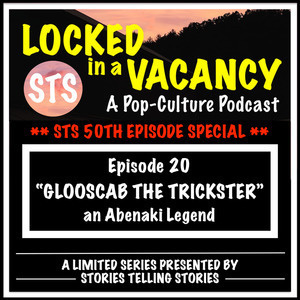 What started as a silly idea of mine a little over three years ago has morphed into something I could never have anticipated. In episode 1 I finished the silly submarine story that Mrs Hazeltine shared in the film that inspired this podcast. I wanted to tell stories. I wanted to write. I wanted to flex my artistic muscles during my theatrical off-season. And now as the STS podcast is on its 50th episode, I’m taking a moment to reflect on just how far this series has come.

The biggest change in the last three years was the introduction of the pandemic-induced LOCKED IN A VACANCY series… What was originally intended as a mini-series that documented my personal journey through covid lockdown week by week, sharing classic stories about solitude and isolation rather than crafting my own, has become in a way more of a flagship series than the original STS idea. This marks episode 20 of LIAV. I can’t believe it’s come this far, but I also can’t believe the pandemic has lasted this long… with no end in sight. LIAV has brought in a massive influx of new listeners and become such a gem in its own right that I foresee it outlasting the pandemic and carrying on in its own right well into the future.

I’ve also spent a great deal of time working on ways to continue to expand the quality and variety of content that STS can offer. With new shows in the development stage that explore new formats and styles, from new material to deep dives with the creative minds behind the work I’m excited for what the next 50 episodes are going to bring our way.

That being said, we’ve still got a few months to go before we wrap up season 3… so far the biggest season yet! As we shift into October there’s going to be a renewed focus on the terrifying and the maccabe as we build towards our annual halloween special. And as we pass from November into December the holiday season will take hold, whether we like it or not, and I’ll be doing some deep dives into the literary and dramatic archives to make season 3 extra special. And as is tradition, we will end Season 3 as December draws to a close with our very special musical episode (but you’ll have to wait and see what I’ve got up my sleeve this year!).

It’s hard to believe that the year is already beginning to wind down. In a lot of ways I still feel trapped in a perpetual state of March, when I began working from home and adjusting to a life lived mostly within my own four walls. Weeks turned into months and now we’re staring down the end of the year. 2020 has been a year for the ages… one that united a lot of the world, but not in the way we would have liked. A year that has brought challenge after challenge, month after month, each seemingly more upending than that last, but also not coming as a major surprise to anyone at this point. We will be telling the story of the pandemic years… of 2020 and beyond and what it was like to live through it. Decades from now it will be relegated to the annals of history, with preserved elements of social media becoming almanacs of the human experience. This podcast has become, in a way, my oral history of the year that was 2020, as told through pop culture and literature for a global audience. Will a podcast still exist decades from now? What is the value of social history through data centers that could one day be shut down? Without a living, breathing oral history, how can we hope that our stories will survive? A century from now, when I’m gone, I’m sure my story will disappear with the memory of my person. Unless I’m able to tell something profoundly important, that can move enough souls to engrain it into the collective consciousness. The internet can be shut down… books can be banned, burned, buried, and forgotten… but an idea can live forever as long as we continue to share it.

If you look back through civilizations across history, the common thread of shared knowledge is the oral storytelling tradition… passed down from generation to generation… that’s how we learn, grow, teach, entertain, and develop as a people. I’ve mentioned in the past my affinity for the storytelling traditions of some of my ancestral people of Ireland and Scotland, but I share a deep bond with another string of storytelling in my blood, as a descendent of the Abenaki nation; a collection of tribes native to the northeast region of the united states and canada. I was exposed to the stories of the Abenaki at a young age and they have always stuck with me, being the sources of projects and reports in school, and stirring my imagination to become a storyteller in my own right.

One of my favorite stories is a tale set around the Abenaki demigod Glooscab, or Gluscabi depending on the tribe, who was known to be something of a trickster. So today, to celebrate 50 episodes of storytelling, I’m going to share a story from the culture of my native american people… this is “GLOOSCAB THE TRICKER,” an Abenaki Legend, on LOCKED IN A VACANCY…